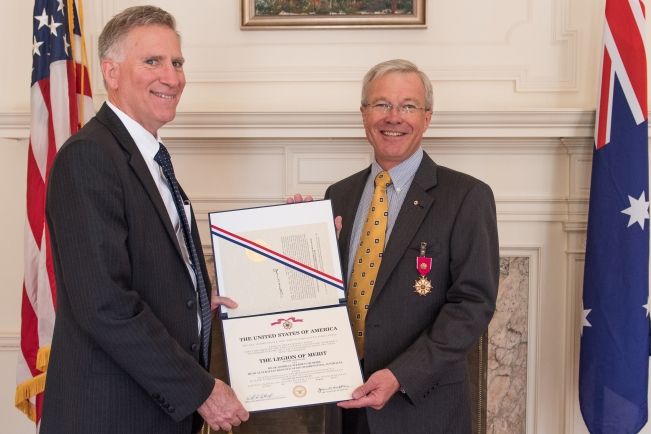 Tasmania’s Defence Advocate has been awarded the United States Military’s highest honour for a non-US citizen, the Legion of Merit.

Rear Admiral (Rtd) Steve Gilmore AM, CSC, was presented the Degree of Officer award by Acting US Ambassador (Chargé d’Affaires, a.i.) James Carouso in a ceremony at the US Embassy in Canberra.

The Legion of Merit recognises ‘exceptionally meritorious conduct in the performance of outstanding services and achievements’ and is conferred jointly by the Director of the US Defense Intelligence Agency and the US Secretary of Defense.

During his time in Washington Rear Admiral Gilmore oversaw all Australian Defence interactions with the United States including oversight of Defence Capability & Sustainment Group’s Embassy-led activities, managing over 400 active foreign military sales contracts with the US involving expenditure of around $15 million each day.

Gilmore was appointed Tasmanian Defence Advocate in August 2017 in a bid to improve Tasmania’s reputation and capacity across the manufacturing sector, in particular defence supply contracts such as the confirmation that Burnie sheet metal manufacturing firm Direct Edge will partner in delivering the next stage of the Land 400 armoured vehicles for the Australian Army.