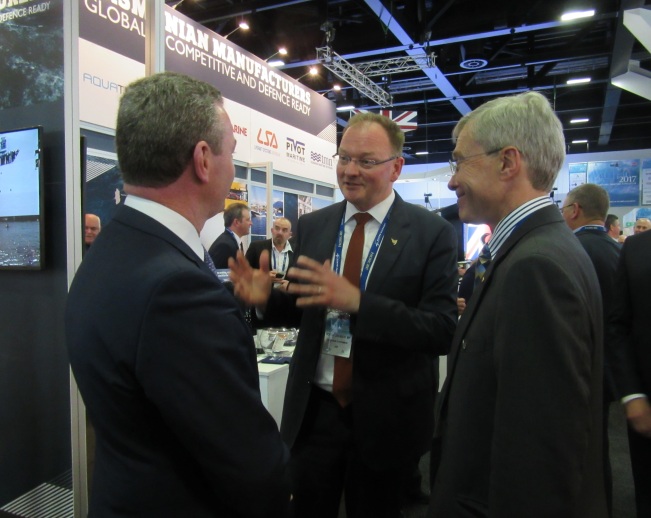 Tasmania has a proud history of producing unique, high-quality products and solutions for highly specialised markets.

The Turnbull Government’s decision to use its $30 billion annual defence spend to grow manufacturing in Australia is creating exciting new opportunities for Tasmanian companies and the Hodgman Government is helping them to put their best foot forward.

The Tasmanian delegation included companies with established reputations in defence and others with innovative new products approaching this market for the first time.

Taylor Bros is a third generation Tasmanian company which has already made its mark in defence, providing internal fitout for the Australian Navy’s submarine and shipbuilding program in South Australia, among other major clients.

The Australian Maritime College and its research arm AMC Search have global reputations in the maritime sector and used Pacific 2017 to launch their new study centre at the Australian National Maritime Museum on Darling Harbour.

Fiomarine has developed a remotely activated marine buoy used to retrieve assets from the sea floor; Pivot Maritime International is Australia’s only manufacturer of portable marine simulators; One Atmosphere has invented an emergency buoyancy system for helicopters operating over water; and PFG’s Aquatruck range includes durable workboats for police and coastal patrol work.

Over three days, our stand hosted Ministers and dignitaries from Australian and foreign defence sectors, major defence suppliers and manufacturers.

The conversations started at Pacific 2017 will spread our state’s reputation in this densely networked market, having already resulted in follow-up visits to Tasmania, which I am confident will lead to more contracts for Tasmanian firms in coming years.

In September 2016, I joined a similar delegation presenting at the Land Forces 2016 defence expo in Adelaide, including Penguin Composites from the NW Coast.

One of the conversations started at that event has recently resulted in Penguin Composites signing a three-year, $8 million contract to supply composite body panels for 1100 Hawkei military vehicles – hopefully the first of many.