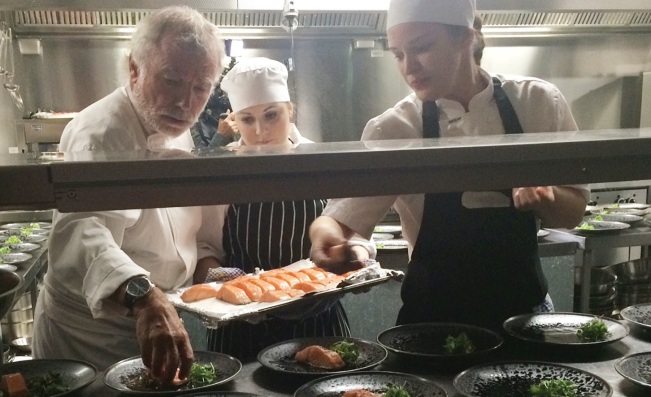 The next generation of cookery and hospitality workers will have the opportunity to work with some of the world’s most influential culinary minds this year as part of TasTAFE’s Drysdale’s Great Chefs series.

Following the success of last year’s series, in 2017, TasTAFE Drysdale is bringing the likes of Alain Passard, Dominque Crenn and Christian Puglisi to Tasmania to work with its students and offer degustation dinners to the public.

Drysdale Division Manager Maree Gerke said the dinners gave students the opportunity to work side-by-side with some of the best chefs in the world to hone their techniques.

“This is a remarkable real-life learning opportunity for our cookery and food and beverage apprentices who will have the opportunity to serve front of house at the degustation dinners at our Drysdale restaurants in Launceston and Hobart,’’ Ms Gerke said

“Our events students are also heavily involved in the planning and execution of the dinners.

“Great Chefs is a great example of how TasTAFE Drysdale is building the capacity of the hospitality industry and chefs to meet the growth of our ever expanding industry in Tasmania.”

Passard, Crenn and Puglisi will travel to Launceston in late March and early April, providing students with life-changing mentoring and the opportunity to learn new techniques and methods as they prepare 10 course degustation dinners for the public.

Alain Passard’s Arpege restaurant in Paris earned three Michelin stars in 1996 and has maintained all three ever since.

San Fransisco’s Dominique Crenn was named the world’s best woman chef in 2016. Christian Puglisi’s Relae in Copenhagen, is a two-time winner of the most sustainable restaurant in the world.