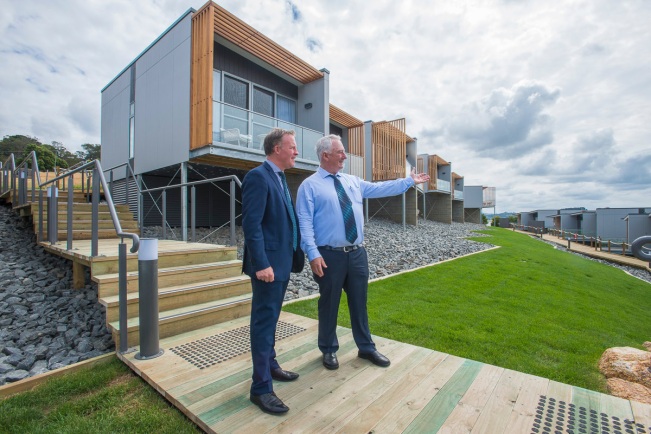 The Tamar Valley is now home to a new accommodation experience after a $5 million investment in the Rosevears Hotel, with more development in the pipeline.

Owner and developer Allan Virieux, purchased the site in 2011, after identifying its great potential.

The long-term resident of the Tamar Valley has a passion for boats and the river, and is now giving visitors to the region the opportunity to experience both.

The refurbishment of the Rosevears Hotel and the recent construction of 26 accommodation suites and a luxury day spa on the existing land was officially opened by Premier Will Hodgman last month.

“This is an enormous vote of confidence in Tasmania’s booming tourism industry and in particular the northern visitor economy,” Mr Hodgman said.

“Visitors to the Northern Tasmanian region increased by 20,000 in the year to September 2016, and developments like this will help meet our increasing tourism and corporate demand.”

The new accommodation consists of 26 rooms comprised of 22 single bedroom rooms, four with a

second bedroom – of which six have an outdoor hot tub.

Stage three, due to commence later this year, is a 30-berth marina on the Tamar River.

The existing business employs 16 Tasmanians including 10 full-time and a further six casual employees. The accommodation will create an additional eight full-time jobs

The business includes tours and transport with a fleet that includes Tamar Taxis, a Limousine and five buses of varying sizes catering for groups and events of all sizes.

Mr Virieux’s foray into tourism follows his 25-year career in contracting.  He started Venarchie Contracting 25 years ago as an owner-operator, with just a single truck and an excavator.

Venarchie now employs approximately 100 staff, has turnover exceeding $25 million per annum and operates a fleet of around 300 items including light vehicles, trucks and specialist equipment.