The four-and-a-half-metre tall, flame-throwing statue that blacksmith Peter Mattila is creating at the Queen Victoria Museum and Art Gallery (QVMAG) will be heating things up this winter, with its completion set for June.

US-born Peter Mattila has been living and working in Australia for 14-years and says there are very few people in world doing what he is doing at QVMAG.

“It is happening here in Tasmania and it is happening right now. This is the largest thing I have ever created on my own,” he said. 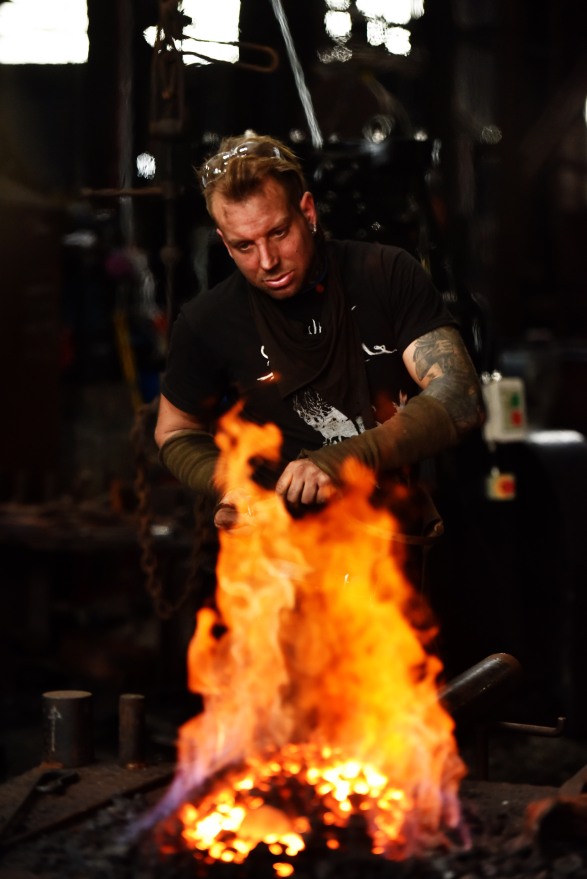 Working from QVMAG’s historic Blacksmith Shop as an artist in residence, Mr Mattila is creating a mobile sculpture that is set to be featured at festivals and shows state wide.

Using natural gas supplied by Tasmanian company, Tas Gas, Mr Mattila said it was difficult to describe what he was creating.

“The simple answer is it’s made of mild steel, it’s a gateway and it shoots fire using natural gas provided by Tas Gas as an energy source,” he said.

“The length is slightly undetermined but we are looking at maybe around six-metres-long.”

Mr Matilla, who has been working with steelwork for 10-years both in Australia and the US, said the museum had asked him at various times over the past three-years to do an artist in residence program.

“Because of the size of the space and the presence of the space, it was difficult to match a piece of artwork that could have the same scale and presentation.

“When I first met with Tas Gas to speak to them about my idea and where we could build the sculpture, we spoke about the fact that I was not just building a piece of artwork, I would be using Tasmanian heritage to bring it life.

“Building it is part of the art. We are doing it in a workshop that is more than 100-years-old with tools that have not been used in a long time and all based around creative outcomes and educating the community.

“We are linking industry, art, heritage and the community all into one thing here.”

Tas Gas chief executive officer Roger Ingram said he hoped the artwork would not only highlight natural gas as an energy source, but help bring the statue to life at various settings around Tasmania.

“We are confident that the installation will be a source of fascination for Tasmanians who see it up close,” he said.

“It highlights natural gas as a source of heat and light but also as an object of interest and fascination.”

“It is a unique collaboration between Tas Gas, the Launceston City Council and the museum, utilising Peter’s unique skillset.”